Is March Madness a Sporting Event—or a Gambling Event? 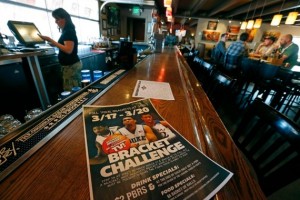 In Robert Altman’s 1970 film M*A*S*H*  there’s a moment in which George Wood’s General Hammond approaches Roger Bowen’s Colonel Blake with a scheme to make some easy money: a football game between the motor pool and the medical unit. He explains, “We put on a football game, we put up a few bets, five thousand maybe, and have a little fun. Special Services in Tokyo says it’s one the best gimmick we’ve got to keep the American way of life going here in Asia.”

“No, football,” the General responds.

But perhaps it’s the Colonel who had it right. The American way of life—or, more accurately, the American way of fandom—is at least as much about gambling as it is about sports. Especially around this time of year. Consider the following: