Is Your Office Pool Legal? 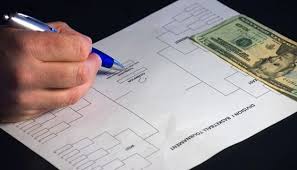 Avoid trouble with the law by following these March Madness pool rules.

Whether or not you want to admit it, you’re probably going to be doing some March Madness gambling in the next few days. We get it. So are we. But i’s not going to be too much fun if that $500 pot costs you your job. That’s why we spoke with Chas Rampenthal, General Legal Counsel at LegalZoom, to find out the dos and don’ts of March Madness office pools.

KEEP IT SOCIAL
“If [you’re organizing the pool] in a professional setting, you want to make sure there is no rule or nothing in your employee handbook that something like this is illegal. Even if you have a great time, if your work finds out about it and you lose your job, it’s not necessarily worth $500 [to win your] NCAA pool,” explains Rampenthal. “If you’re going to be doing this at work or doing this on work time, I always say its better to ask permission than forgiveness. If you’re in doubt, ask. If they say no, pull it out of work and put it in a social setting.”

ON THE LEVEL
“The idea here is that all the players need equal footing. Any time you take it outside of the social context, which means, ‘Hey, I’m having a party over at my house and I want everyone to kick in an extra X because I’m providing pizza and beer,’ or, ‘I’m the commissioner so I’ll earn an extra $10,’ that really pulls it out of the social context. All the players have to be the same, even if you’re the commissioner.”

KEEP IT LOW
“The lawyer in me wants to say to keep [the bets] as low as possible, but high enough that they keep people interested. The higher the stakes, the more likely it could attract the wrong attention,” Rampenthal explains. “If everyone puts in $1,000 and someone takes away $20,000, it’s more likely that someone’s spouse gets mad about it. It depends on state law, but if we’re just using logic and reason, I’d say anywhere in the $20-$50 is not likely to get the eye of the authorities.”

WHAT’S THE WORST THAT COULD HAPPEN?
“In a lot of states, if it’s over $10 but under $500, it’s like a ticket, you just pay a fine. It can be looked at as a misdemeanor. A misdemeanor has the ability to carry jail time, but it rarely does,” Rampenthal says. “The more willful or repetitive or high stakes, or doing things like taking a cut or bookmaking takes you into a felony offense. A felony offense is more likely to carry jail time, especially if it’s not your first one.”